Add this event to your calendar: iCal , Google calendar 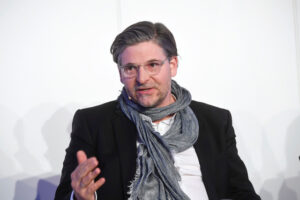 A CONVERSATION WITH JAN-WERNER MUELLER

Trump is a symptom, not the cause of the trouble experienced by the US.  The talk takes us back to basic democratic principles and argues that we need to understand what has gone wrong with the two institutions which, ever since the nineteenth century, have been considered crucial for making representative democracy work: political parties and free media.  A number of concrete ways to rethink and re-design these institutions are offered.

He is the author of several award-winning books, including Another Country: German Intellectuals, Unification and National Identity (Yale UP, 2000; Chinese translation). His history of political thought in twentieth-century Europe, Contesting Democracy, was published by Yale University Press in the summer of 2011 (Italian, French, Danish, German, Swedish, Russian, Polish, Chinese, and Serbian translations). Was ist Populismus? was published by Suhrkamp in April 2016; the University of Pennsylvania Press brought out an American version, What is Populism?, in September of 2016; the book has been published or is scheduled to be published in more than twenty other languages so far. Mueller’s book Furcht und Freiheit: Für einen anderen Liberalismus was published by Suhrkamp in 2019 and won the Bavarian Book Prize. His Christian Democracy: A New Intellectual History, based on his Carlyle Lectures in Oxford, is forthcoming with Harvard University Press; his Democracy Rules will appear with FSG. His public affairs commentary and essays regularly appear the Neue Zürcher Zeitung,  the Süddeutsche Zeitung, Le Monde, as well as in the London Review of Books, the New York Review of Books, Foreign Affairs, The Guardian, the New York Times, and Project Syndicate.

You may submit questions for Jan during the live event on the YouTube chat page, or ahead of time to programm@amerikahaus.de